Fluorescence microscopy is applied for the detection of specific structures, molecules, or proteins within a cell. When using this technique, almost any component of living and fixed cells or tissues can be “stained” and thereby specifically imaged—up to the highest magnifications. Immunofluorescence assays are widely analyzed using widefield fluorescence microscopy. It is also possible to visualize several structures in parallel, which then appear as different pseudocolors in the obtained image. 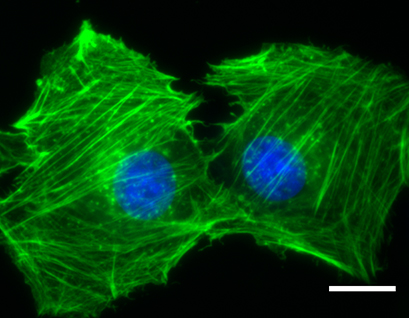 Widefield fluorescence microscopy is a variation of light microscopy and the easiest fluorescence imaging mode. The underlying key principle is the use of fluorescent molecules—so-called fluorophores—for the labeling of defined cellular structures. These molecules, such as green fluorescent protein (GFP), absorb light at a specific wavelength (excitation) and emit it at a specific higher wavelength (emission). To visualize the molecule of interest, fluorophore-coupled specific antibodies or proteins, for example, are transferred into the cell. The specimen is then illuminated at the excitation wavelength and viewed through a filter that allows only the emitted wavelength to pass through. Whereas the background is dark, the structures with a bound fluorophore emit light, indicating the presence of the structure of interest.

In contrast to confocal microscopy, the whole specimen is exposed to light in widefield fluorescence microscopy. Fluorescence signals from all focal planes are detected, which leads to lower contrast in thick samples like spheroids and tissue. Therefore, widefield microscopy is best applied with thin specimens with low background autofluorescence, like adherent cells. 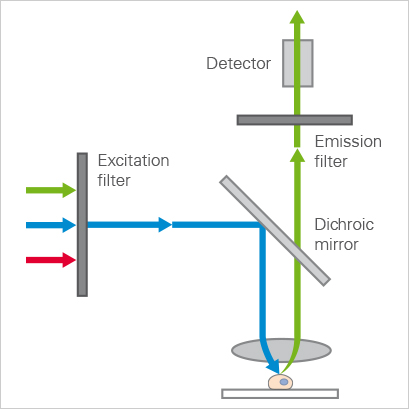 Light pathways in a widefield microscope.