A chemotaxis assay is conducted to analyze whether or not a cell type directly orients and migrates towards a defined chemoattractant. Since chemotaxis is a particularly important process during cancer development and immune infiltration, frequently used cell types in chemotaxis assays are cancer cells and immune cells.

Chemotaxis assays enable the investigation of: 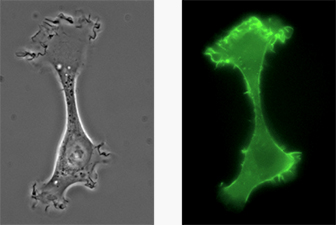 A chemotactic HT-1080 LifeAct-TagGFP2 cell migrating on a 2D surface.

Many cells naturally grow in a three-dimensional environment. When cultured in vitro, cells are attached to a flat 2D surface and might behave differently than when they are inside a 3D gel matrix. In many cases, a 3D environment more closely resembles an in vivo situation, and this should be considered when planning chemotaxis assays.

Using the µ-Slide Chemotaxis, chemotactic gradients can easily be established in water-based gels, such as Collagen I gels and Matrigel, because the gel structure does not hinder the diffusion. Find out more information about the advantages and disadvantages of 3D chemotaxis assays here.

Microscopy and schematic of adherent HT-1080 cancer cells on a 2D surface (left), and embedded into a 3D Collagen I gel (right).

Several chambers with different characteristics have been developed to perform chemotaxis assays:

The μ-Slide Chemotaxis was developed to investigate the chemotactical behavior of fast or slow migrating, non-adherent or adherent cells on 2D surfaces or in 3D gel matrices. It is possible to observe the cell migration in linear and stable concentration profiles for more than 48 hours. As gradients are rapidly established, fast migration responses (occurring in less than 30 minutes) can also be measured.

Using the µ-Slide Chemotaxis allows for detailed and defined analysis of the migration behavior of various cell types, such as endothelial cells, fibroblasts, cancer cells, and immune cells. 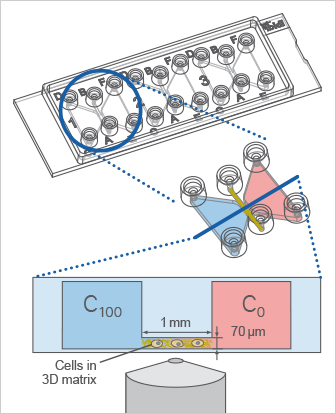 Using the µ-Slide Chemotaxis, the cells can be cultivated in a 3D gel matrix or on a 2D surface. In this example, a 3D experiment with migratory cells in a gel matrix is shown. 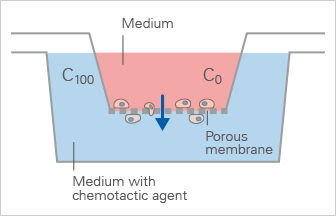 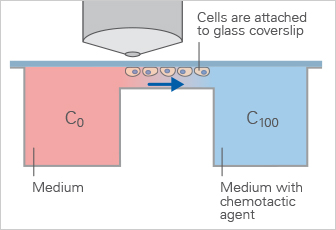 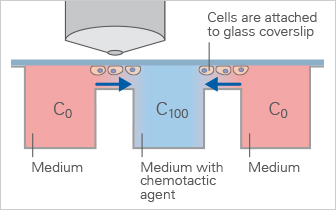