Super-resolution microscopy enables the visualization of the smallest structures in living cells that cannot be resolved using standard widefield or confocal fluorescence microscopy. This technique provides a spatial 3D-resolution that is well below the diffraction limit. It creates new views on the structural organization of cells and the dynamics of biomolecular assemblies, that are close to a near-molecular resolution. 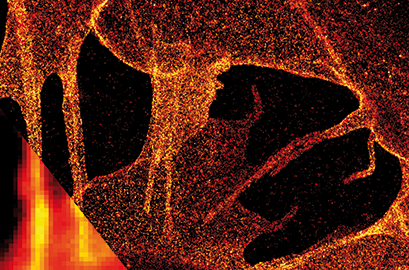 Resolution is described as a function to discriminate two dots from each other. It is dependent on the wavelength and the numerical aperture and is physically limited by Abbe's law.

When using widefield and confocal fluorescence microscopy, the diffraction barrier limits the maximal resolution to about 200 nm. Super-resolution microscopy breaks the diffraction barrier, enabling "nanoscopy" with substantially improved optical resolution of down to 5–20nm. This method uses the physical or chemical properties of adjacent fluorophores to resolve them from each other. For example, while one fluorophore's state is "on", the neighboring fluorophore's state is "off", which enables their differentiation.

Several super-resolution microscopy techniques were developed, each with its own advantages and disadvantages. There are deterministic and stochastic functional techniques. Common examples are:

Find more detailed information about the principle of super-resolution microscopy and its different approaches in the publications below.