Impedance Measurements in Combination with the ibidi Pump System

Endothelial cells in vivo and in vitro respond to shear stress by activating intracellular signaling pathways, with morphological changes and gene expression. The shown experimental setup combines the ECIS System with the ibidi Pump System to more closely simulate the in vivo environment. Since endothelial cells are exposed to shear stress in their physiological environment, cell cultivation with a permanently circulating medium replicates the physiological conditions more accurately than static cultivation in open wells. 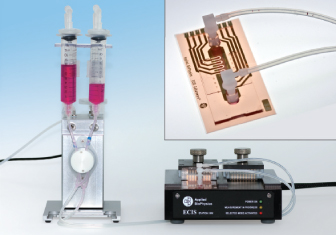 The data shown indicates two different properties of the endothelial cell layer. In the short run (i.e., before confluence), applying a flow leads to a non-permanent increase of the resistance. In the long run, a continuous laminar shear stress reduces the resistance of the cell layer. This reduction is reversible and can be neutralized by stopping the flow. These physiological differences are accompanied by strong morphological and biochemical changes in and within the cells. Cell-to-cell contacts, and the arrangement of the cells, will change after some days under flow conditions. The actin skeleton is well-organized, and the VE-cadherins will change from a diffused arrangement, to a well-organized one (see fluorescence images). 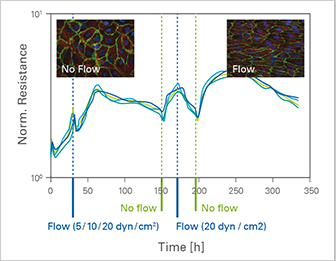 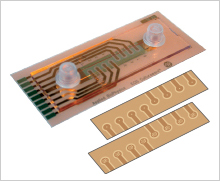 Live cell imaging of HUVECs cultured under flow conditions (20 dyn / cm²) in μ-Slide I 0.4 Luer for 9 days. The cells were transduced with the adenoviral vector rAV CMV LifeAct-TagRFP 24 hours prior to running the experiment. 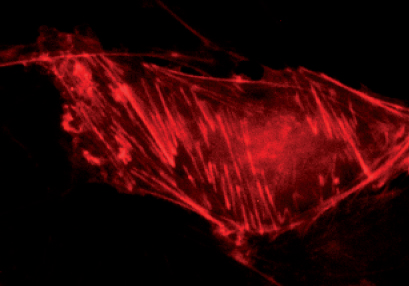 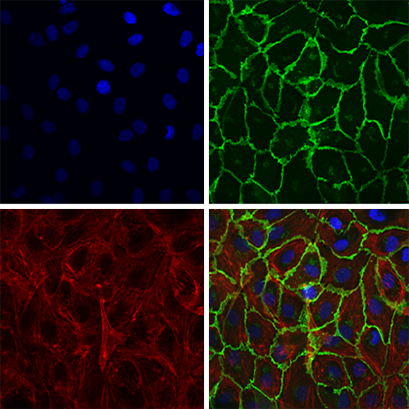 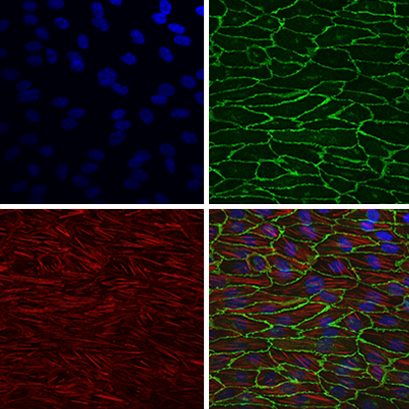