The Geometry of the ibidi Chambers:
Optimized for Your Application 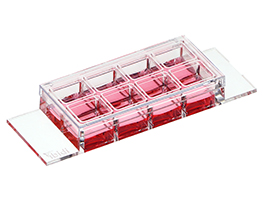 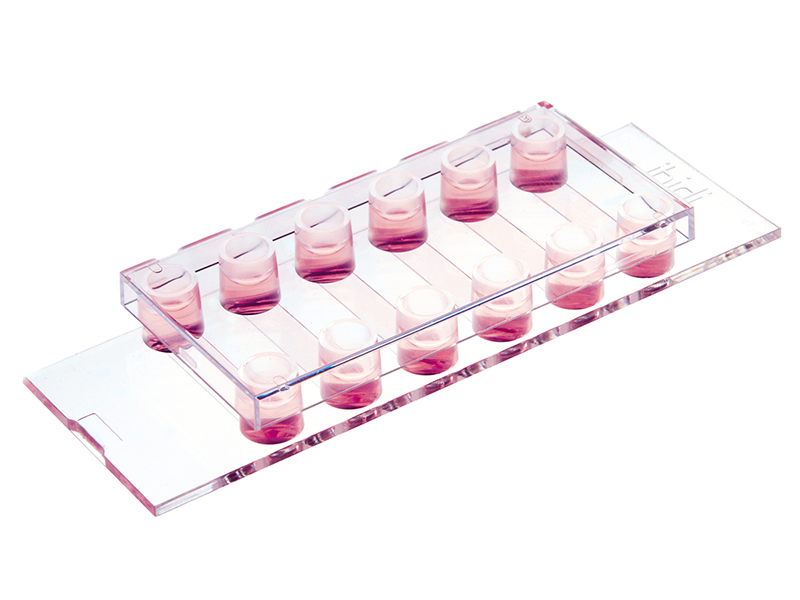 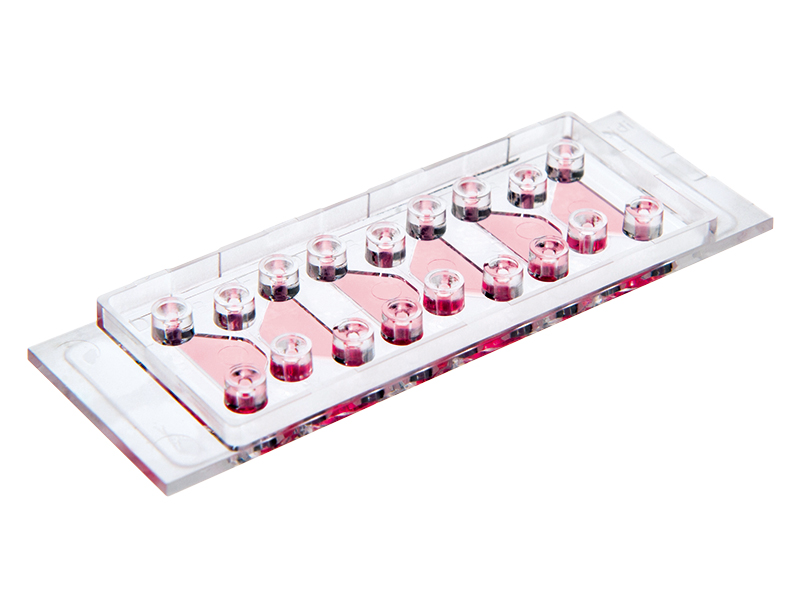 Your cell-based assays are as versatile as our chambers: We provide imaging chambers with various geometries that are specifically tailored to your assay. In order to guarantee the highest imaging quality at optimized experimental conditions, we have developed our imaging chambers using a combination of geometrical patterns and physical features. The all-in-one chambers reduce the time and number of experimental steps needed in cell-based assays. In addition, ibidi provides labware with specialized geometrical designs for functional cell-based assays, such as angiogenesis, chemotaxis, wound healing, or cell migration assays.

All-In-One Chambers: All Steps in One Single Slide

All-in-one chambers have been developed to optimize the daily lab routine by providing an all-in-one solution for cell cultivation, treatment, and live cell imaging. The design of the ibidi μ-Slides, μ-Dishes, and μ-Plates allows for all of the experimental steps—from cell cultivation to microscopic imaging—to be conducted in one single chamber.

The open-well format of the µ-Slide 2 Well | µ-Slide 4 Well | µ-Slide 8 Well high | µ-Slide 18 Well, and the μ-Dish 35 mm, high allows for the use of standard immunofluorescence protocols—with all procedures done in one single slide. After fixation and staining, the sample can be observed through the coverslip bottom using high-resolution microscopy. There is no need for an additional glass coverslip.

Channel formats like the μ-Slide VI 0.4 are ideal for an exact exchange of small amounts of reagents. These μ-Slides reduce the number of experimental steps needed for immunofluorescence assays. Due to the low volume, the channel slides help saving a lot of money for antibodies. 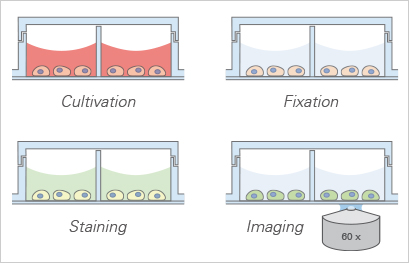 Order a free sample to test the ibidi µ-Slides, µ-Dishes, and µ-Plates with your experiments.

With the 3 Well | 8 Well | 12 Well Chamber Slides, removable, ibidi provides self-adhesive, removable silicone chambers that are mounted on a standard glass slide (1 mm thickness). They are suitable for upright and inverted microscopy and enable long-term storage of samples after immunofluorescence staining.

All steps in the immunofluorescence assay can be done in one single slide, which simplifies the overall procedure and requires only a small number of cells and a low amount of antibody and medium.

Please note: In principle, glass bottoms are suitable for direct cell culture. However, to promote cell attachment, a surface coating might be required prior to cell seeding. 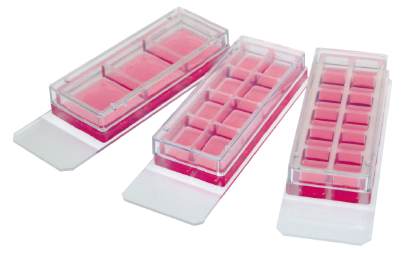 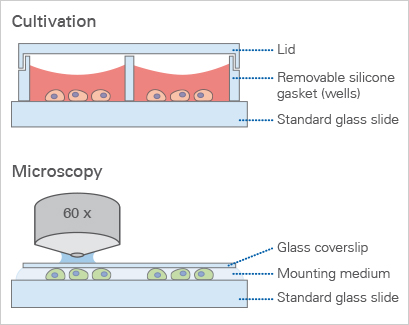 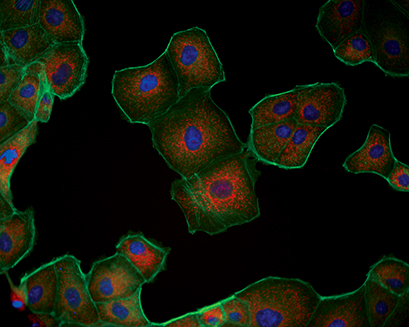 In addition to being optimized for cell culture under flow, the ibidi channel slides format provides the ideal geometry for homogeneous cell distribution.

In contrast, cell densities in open wells are very de­pendent on the handling during cell seeding. Due to the channel's closed geometry, cell densities do not vary depending on their positions inside the slide. Further, they are not affected by handlingand treatment during and after cell seeding.

To demonstrate the influence of slide geometry on cell distribution, cultivated cells within the open µ-Slide 8 Well and the channel μ-Slide VI 0.4 were visualized macroscopically and microscopically, respectively. Macroscopically, the cells cultured in the µ-Slide 8 Well formed characteristic patterns, which is typical for all open well formats. In general, the cell density in the middle of the well reached its maximum, while fewer cells attached to the outer well regions. Some cells congre­gated to the edges of the well. This inhomogeneous cell distribution is influenced by the meniscus (a natural phenomenon in all open well formats) and handling of the slide (e.g., shaking or movement). In contrast, the cell distri­bution in the μ-Slide VI 0.4 stayed homogeneous. Phase contrast and fluorescence microscopy confirmed these differences. 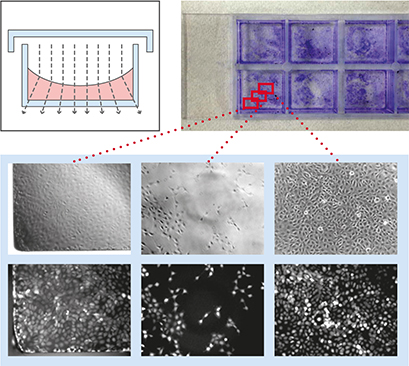 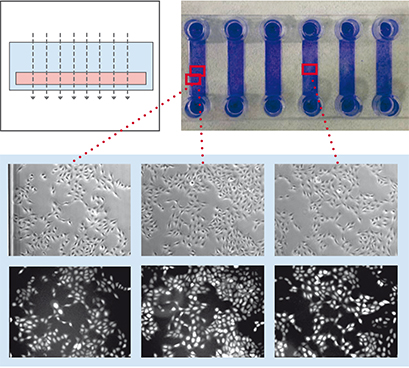 Condensation, which occurs on the lid of the culture vessel after being removed from the incubator, is another effect that disrupts phase contrast microscopy. When using the ibidi channel slides, condensation inside the optical pathway is intrinsically impossible. 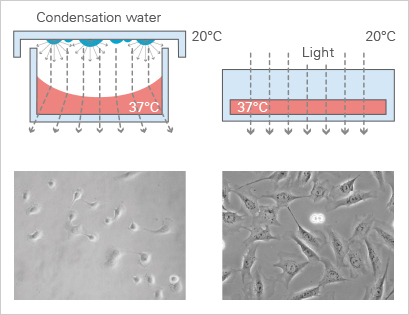 The µ-Slides and µ-Dishes with Ph+ feature (Phase Contrast +) are designed for excellent phase contrast microscopy without meniscus, which naturally disturbs the phase contrast effect in standard open wells. The Ph+ version provides a special intermediate plate in the center of the well. This plate flattens the meniscus and creates a parallel beam throughout the plate, thereby increasing the area of well-contrasted cells. Openings near the corners provide access to the wells for the easy filling and aspiration of liquids. This innovative technique supports meniscus-free phase contrast microscopy in a very convenient manner.

Depending on your application, you can choose between the following labware formats:

Working with the Ph+ Slides Diminishes the Meniscus Effect 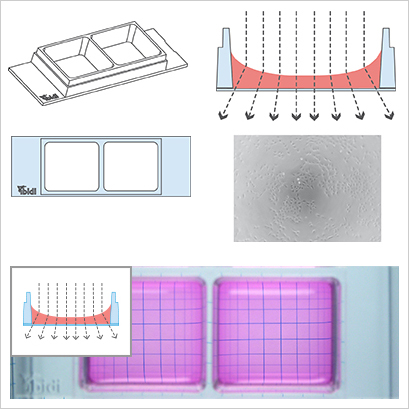 Illustration of the perturbing effect of a meniscus. Light is refracted on the air-water-interface, leading to poor contrast in microscopy. Only the small center part exhibits satisfying phase contrast. 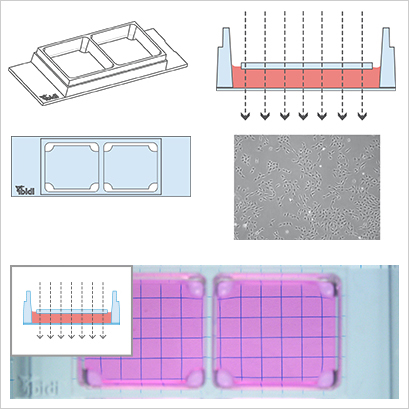 Working with the Ph+ slides diminishes the meniscus and increases the area of well-contrasted cells.

Read on and learn more about the ibidi Coverslip Bottom or the Chamber Surfaces.