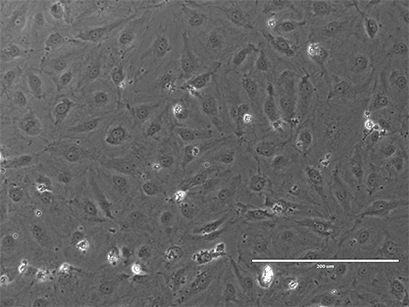 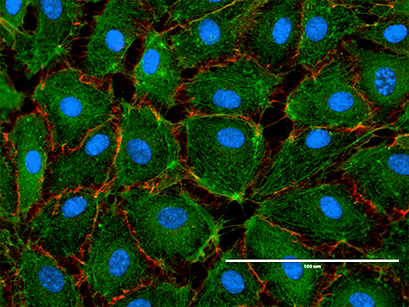 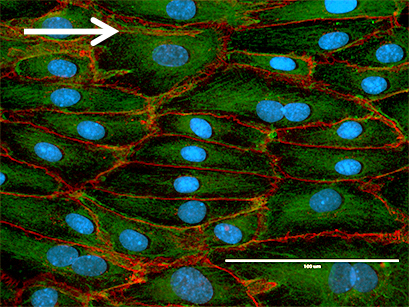 After the flow experiment, immunofluorescence stainings can easily be done in the ibidi Channel Slides. When comparing the cultivation of HUVEC under static and flow conditions, the differences in the cellular organization and various cellular compartments (e.g., tight junctions) are clearly visible.

Under static conditions, HUVEC are generally large with a chaotically structured actin skeleton. In contrast, flow-conditioned cells are elongated and show distinct stress fibers. F-actin was stained with phalloidin (red). VE-cadherins (green), which mark the adherence junctions, are present in both conditions. Nuclei are stained using DAPI (blue). 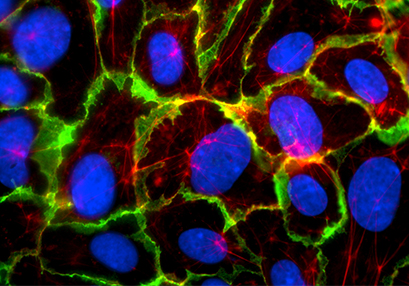 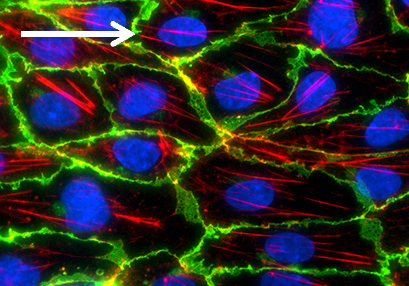 Claudin-5, a tight junction protein, can be found at the cell-cell contact zone of flow-conditioned cells after 5 days (green). This shows that the impact of the mechanical shear stress is crucial for the differentiation of the cell layer. F-actin was stained with phalloidin (red). Nuclei are stained using DAPI (blue). 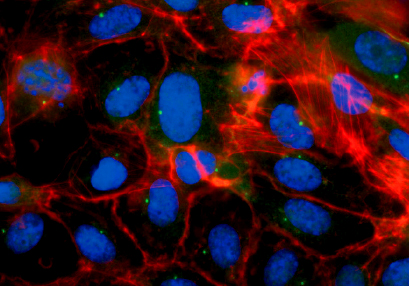 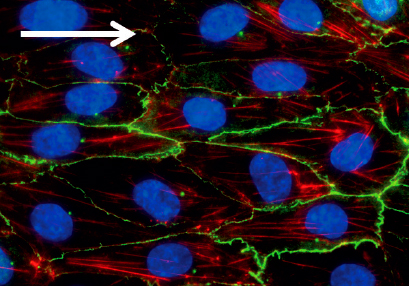 The Golgi apparatus, stained with Anti-Human-Golgin-97 (red), is localized along the direction of flow. F-actin was stained with phalloidin (green). Nuclei are stained using DAPI (blue). 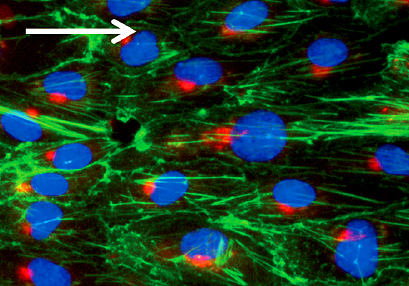 The von-Willebrand-Factor (vWF, stained with anti human von-Willebrand-Factor) is a typical endothelial cell marker. When the cells are exposed to flow, the vWF-multimers elongate to rods that are sticking to the cell membrane (green). Nuclei are stained using DAPI (blue). 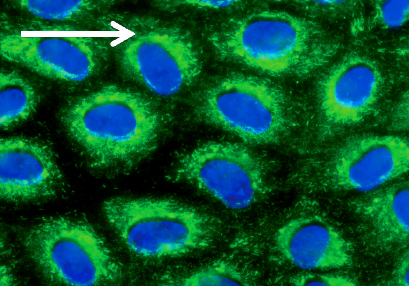 Mechanical perturbations have a profound effect on the characteristics of cell layers in vitro. In long-term experiments with HUVEC, three different phenotypes can be observed: a round flat cell after seeding, elongated cells after 1–2 days, and finally an oriented cobblestone appearance of a dense, compact cell layer. The morphological changes are accompanied by physiological changes of the endothelial cell monolayer, which can be measured by impedance monitoring.

Cells are cultivated in channels with electrode arrays. Depending on the state of development of the endothelial cell monolayer, the gaps between the cells (influenced by the cell-cell contacts) change in size. These shifting gaps can be characterized by their change in conductivity when applying AC currents of different frequencies. The continuous red lines in the scheme represent the ion currents between the cells when applying the AC current.

For a detailed description, please refer to the applications website "Impedance-Based Cell Assays". 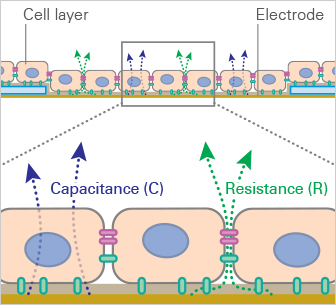 Conductivity and Impedance Change of an Endothelial Cell Monolayer

After seeding, cells grow to confluence in 2–3 days. During this time, the conductivity is reduced, and the resistance rises to a plateau, which is then maintained under the subsequent static culturing over several days.

Read on and get an overview about Cell Culture Under Flow, or learn more about the Planning, Setup, and Analysis of a Flow Assay.