For a successful tube formation experiment, please address these questions before you begin. 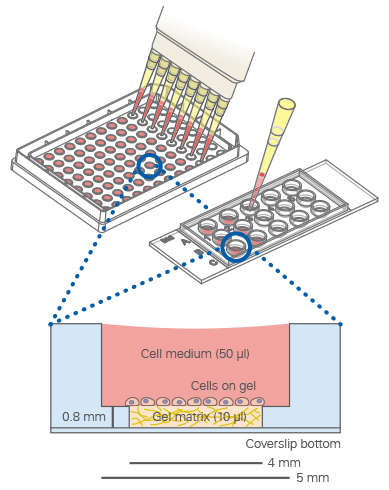 When using the µ-Slide 15 Well 3D, the amount of gel matrix is reduced to 10 µl per well due to the well-in-a-well technology.

Pipet the gel matrix (e.g., Matrigel®, collagen gel, or hydrogel) into the lower well of the µ-Slide 15 Well 3D. Incubate until the gel has polymerized, then seed the cells into the upper well. Shortly after seeding, the cells will sink down to the gel surface and then be ready for observation.

The µ-Slide 15 Well 3D guarantees the convenient observation of tube formation on any inverted microscope without gel meniscus.

It can be used with all common 3D gel matrices, such as Matrigel®, collagen gels, and similar hydrogels. In addition, it helps to reduce costs drastically by minimizing the amount of gel needed to only 10 µl.

For large-scale angiogenesis experiments, we provide the µ-Plate 96 Well 3D.

In most cases, phase contrast microscopy is used to monitor the tube formation, but fluorescence microscopy is also a possibility. Depending on your focus, this can be achieved with either live cell imaging or by taking images at distinct time points (e.g., after 6 and 12 hours). 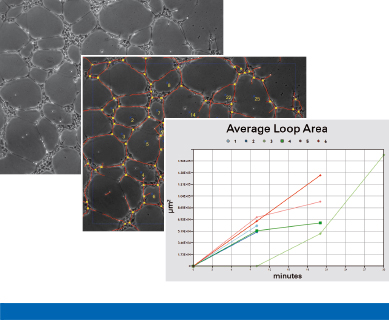 After image acquisition, parameters such as tube area, tube length, tube number, loop area, loop number, and the number of sprouts can be analyzed. This can be performed manually or by using automated software. The statistical comparison of the parameters (either alone or in combination) will give an overview of the extent of tube formation under different conditions.

Questions to Ask Before Starting an Experiment

Which endothelial cells should I use?

Endothelial cells are highly organ- and tissue-specific. Due to this heterogeneity, the time for tube formation varies among the different endothelial cell types. This must be considered when planning the experiment. Typically, low-passaged human umbilical vein cells (HUVECs) are used for a tube formation assay.

Further examples of cell types that can be applied are:

Which cell density is optimal for my experiment?

The determination of the correct cell number is crucial in obtaining optimal results from a tube formation assay. The cell density is dependent on the cell type and cell size. Before starting the actual experiment, we recommend seeding several cell numbers under non-inhibited conditions and imaging the tube formation. The cell density with the highest number of tubes created will show the most distinct effects of substances, and therefore should be used for the experiment. Remember that the cells typically do not proliferate on the gel matrix. Generally, we recommend the use of 5,000–10,000 HUVECs per well.

Which gel matrix should I use?

The tube formation rate of endothelial cells depends on the type and the components of the gel that forms the basement membrane-like extracellular matrix (ECM) surface, on which the cells are seeded. Several basement membrane extracts are commercially available, such as Matrigel® and Cultrex®., both of which are secreted by Engelbreth‐Holm‐Swarm (EHS) murine sarcoma cells. Before starting the experiment with a particular endothelial cell type, we advise testing several basement membrane substances and following the published protocols. If pro-angiogenic agents will be tested in your assay, a growth factor-reduced gel matrix should be used. Also, if possible, use the same lot for the whole experiment.

Which controls should be included in the experiment?

For the proper statistical analysis of your results, it is important to include a positive and a negative control. As a positive control, perform a tube formation assay with your cell line of interest without using any inhibitor. When cultivated on growth factor-reduced Matrigel® with starving medium, endothelial cells should show formation of tubes within a few hours. As a negative control, a tube formation inhibitor that does not affect cell viability can be used.

Are my pipettes working precisely and are they calibrated frequently?

To avoid meniscus formation of the gel matrix when using the µ-Slide 15 Well 3D, it is crucial to pipet an exact amount of 10 µl into the inner well. In addition, seeding of the right cell number is extremely important. It is therefore necessary to use calibrated pipettes that are in perfect working order. We recommend to wet the pipet tip with the respective gel and then to fill the wells using this one tip.

During which timeframe should I observe the cells?

The duration of tube formation depends on the cell type and on the extracellular matrix being used, and should be determined individually. Typically, HUVECs already form tubes after 2–4 hours. After 24 hours, the cells start to undergo apoptosis, and this leads to detachment from the matrix and the breaking of the tubes. 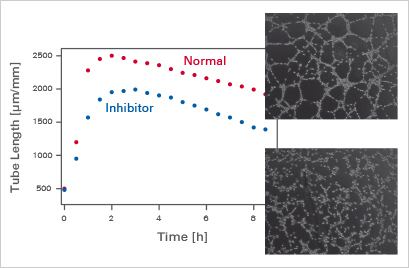 Influence of inhibitors on tube formation over time.

Should I monitor the tube formation manually or automatically?

If live cell imaging equipment is available, we recommend using time lapse video imaging—especially, if you are not familiar with the angiogenetic behavior of the used cell type. In a typical setup, a photo is taken automatically every 5–15 minutes within the timeframe of 24 hours. This enables the precise monitoring of the progress of tube formation, e.g., after the addition of a special substance. If you already know the approximate time frame of the tube formation, it is also possible to manually take pictures at the expected time points of interest.