Experimental Workflow of a Chemotaxis Assay

For a successful chemotaxis experiment, please address the following questions before starting. 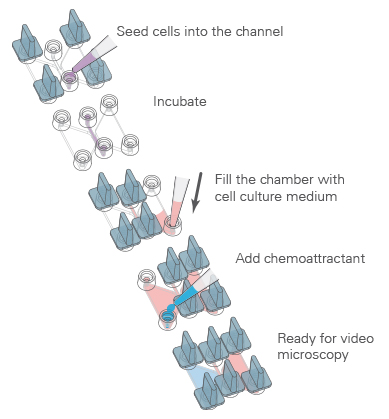 Using the µ-Slide Chemotaxis, reproducible chemotaxis assays with defined chemotactic gradients can be carried out.

First, the cells are seeded, which can be done either in a 2D or a 3D environment. After incubation and cell attachment, the two reservoirs of each chamber are filled with the chemoattractant, according to the determined loading scheme.

More information about the detailed handling of the µ-Slide Chemotaxis can be found in the Application Note AN 17: Chemotaxis 2D and 3D (PDF).

It allows for the creation of a precisely defined, stable chemotactic gradient in a reproducible environment.

Time-lapse microscopy of the migration of MDA-MB-231 human breast adenocarcinoma cells in a collagen gel. Cells were observed over a period of 24 hours in the µ-Slide Chemotaxis with EGF as chemotactic agent. Physiologic conditions were maintained by the ibidi Heating and Gas Incubation System.

Live cell imaging under physiologic conditions enables for the detailed documentation of the cell migration over time, a process which is necessary for the proper analysis of a chemotaxis assay.

The duration of the imaging period depends on the cell type (e.g., fast migrating leukocytes or slow migrating tumor cells or fibroblasts) and the environmental conditions (e.g., type and concentration of the chemotactic agent). A typical video microscopy setup for slow migrating cells includes taking a photo every 2.5–10 minutes over a period of 24 hours.

Since each experiment optimally contains tracking data from 20–40 single cells, low-magnification microscopy objective lenses, such as 4x or 10x, should be used.

The ibidi Heating and Gas Incubation System provides a physiological environment under the microscope, which enables live cell imaging during short-term and long-term chemotaxis assays. 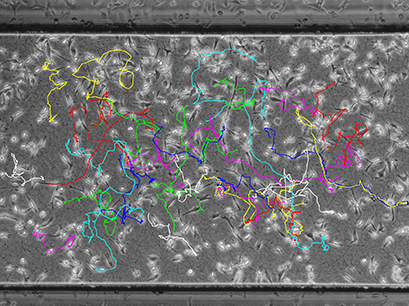 Visualization of cell traces after tracking with the ImageJ Manual Tracking plugin. 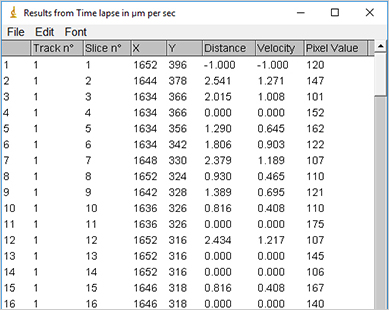 Output of the ImageJ Manual Tracking Plugin after tracking; data table with positional values of each tracked cell (x, y) for each time point (t).

Typically, live cell microscopy of a chemotaxis assay creates a temporal image stack, where each image displays the exact cell position at a specific time point.

For quantification of their movement, single cells are tracked over time by determining their position on each frame of the image stack. The tracking can be done either manually or automatically using special software. Afterwards, the positional values of each tracked cell (x, y) are available for each time point (t) and can be further analyzed.

Automated tracking and data analysis:
The Chemotaxis FastTrack AI Image Analysis by MetaVi Labs is an AI-based automated image analysis solution for chemotaxis assays. The web-based software combines fast and powerful cell tracking with artificial intelligence (AI) for objective and reproducible analysis without labeling. Simply upload your data into your FastTrack AI account and start the analysis job. Within 1 to 2 hours, you will receive a detailed report for download and further evaluation.

Manual tracking:
The ImageJ Manual Tracking Plugin assists in manually tracking cell migration in chemotaxis assays. It can be downloaded for free here.

Find a detailed description of the data analysis steps of chemotaxis assays here:

Questions to Ask Before Starting an Experiment

In order to set up a chemotaxis assay correctly, it is crucial to answer the following questions first:

Which cell type are you planning to investigate?
Knowing your cell type of interest—including the culture medium requirements and the migration speed—is essential for subsequent assay planning.

What is the migration speed / velocity of the cell type being analyzed?
Whereas some cells have a low migration speed (e.g., tumor cells or fibroblasts), other cell types (e.g., leukocytes) migrate very quickly. The cell migration speed will determine the duration of the experiment and the intervals required between the images. Also, the gradient stability must be high enough to fit the total duration of the experiment. The µ-Slide Chemotaxis is suitable for chemotaxis assays with both slow and fast migrating cells.

What is the optimal culture medium?
Most cell types are cultured in a medium supplied with fetal calf serum (FCS). FCS contains many factors (e.g., enzymes, hormones and growth factors) that can influence the cell migration, and therefore might alter the outcome of a chemotaxis assay. For example, the effects of a chemotactic agent on cell migration can be masked by FCS-induced effects. Gradual reduction of the FCS concentration in the medium, before starting the assay, is one way to overcome this issue. Furthermore, special, serum-free culture media without FCS have been developed. The optimal medium composition for each cell type of interest must be tested before starting the assay.

How many experiments should be performed?
Typically, three to five repeat experiments are sufficient to create significant data from the chemotaxis group and the respective control group. Each experiment should contain tracking data from 20–40 single cells, which is possible using low-magnification microscopy objective lenses, such as 5x or 10x.

Should I perform a 2D or a 3D chemotaxis assay?
Most cells are naturally embedded in a 3D matrix. Culturing them in a 2D environment during a chemotaxis assay might alter their behavior and migrational capabilities. To overcome this issue, cells can be embedded in a 3D matrix that mimics their natural environment, such as collagen, Matrigel, or other hydrogels. The µ-Slide Chemotaxis is ideally suitable for both 2D and 3D experiments.

- Difficult gel handling; more parameters to control during the experiment
- Cells might attach to 2D surface, thus creating 2.5D conditions
- Cells might go out of focus during 3D tracking 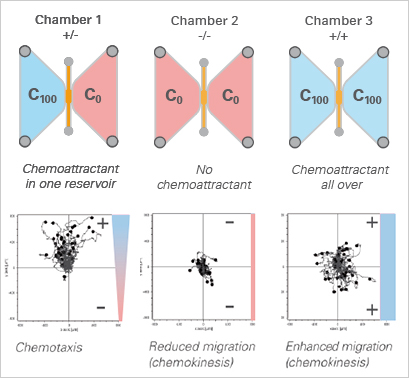 Experimental setup (top) and data plots (bottom) of a chemotaxis assay including the experimental group (+/-), a positive (+/+), and a negative (-/-) control group.