Membrane fusion is a novel and highly superior transfection method to incorporate various molecules and particles into mammalian cells. Not only cells that undergo cell division, but also primary and non-dividing cells can be transfected by using this innovative method. It allows for highly efficient transfer of mRNA, siRNA, proteins, beads, dyes, and other molecules. Since the reagents are non-toxic to sensitive and difficult-to-transfect cells, even primary neurons, keratinocytes, and stem cells retain high viability after the transfection. Additionally, the very short incubation times minimize cell stress and provide an almost unaffected cell behavior after the molecule transfer.

Liposomal carriers, which consist of neutral and cationic lipids, are used to transfer the molecule of interest via membrane fusion into the cell. The molecules are first incorporated into the liposomal carriers, which upon contact, instantly fuse with the cell membrane. The included molecules are then directly released into the cytoplasm without processes such as endocytosis and lysosomal degradation. This results in fusion efficiencies up to 80–100% within only seconds to a few minutes, depending on the cell type. 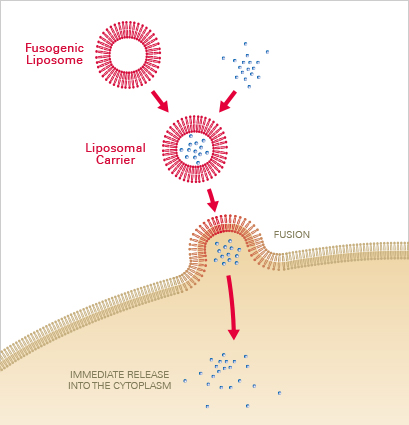 Lipofection is commonly used to transfer nucleic acids such as RNA or DNA into eukaryotic cells. After protocol optimization, this method is easy to apply and yields highly reproducible results of transient and stable transfections. However, lipofection efficiency strongly depends on the cell type and has to be tested and optimized in advance. Especially for primary and non-dividing cells, the viability after the transfection process might be decreased due to the high cellular sensitivity. In contrast to membrane fusion, lipofection is based on endosomal molecule uptake, which might delay the time of analysis. 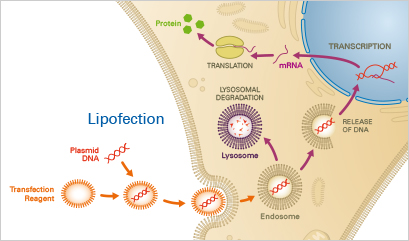 Usually, a mixture of neutral and cationic liposomes forms complexes with the nucleotides of interest. These complexes pass the cell membrane and then release the nucleotides into the cytoplasm via endocytosis. Then, the nucleotides either successfully escape the endosome or undergo lysosomal degradation, of which the latter might lead to reduced transfection efficiency. After endosomal escape, the nucleotide is expressed in the target cells.

The calcium phosphate transfection is an inexpensive and simple method for transient or stable nucleotide transfer into most cell lines. The transfection efficiency, however, strongly depends on the cell constitution, the pH, and the quality and the amount of the used nucleotides. Therefore, the optimal experimental conditions have to be tediously established in advance. Further, the calcium phosphate transfection is toxic and therefore not suitable for most sensitive primary cell lines.

A mixture of the nucleotides, calcium, and phosphate buffer forms a precipitate that is taken up by the cells via endocytosis. Then, the nucleotides either escape the endosome or undergo lysosomal degradation, of which the latter might lead to reduced transfection efficiency. Successfully escaped nucleotides can then be expressed in the target cells. 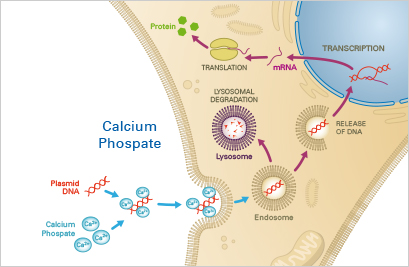 Using cationic polymers, nucleotides can be transiently transfected into eukaryotic cells in an inexpensive and simple manner. After protocol optimization, the results can be easily reproduced. As a drawback, transfection by cationic polymers has a very low efficiency (<10%) in a number of cell types, including primary cells. Further, cationic polymers are highly cytotoxic and therefore not suitable for transfection of sensitive cells and generation of stable cell lines.

The negatively charged nucleotide backbones form complexes with cationic polymers, such as diethylaminoethyl (DEAE)-dextran. The complex is then taken up by the cells, mostly via endocytosis. If no lysosomal degradation occurs, the nucleotide can escape from the endosome into the cytosol of the host cells, subsequently resulting in transgene expression. 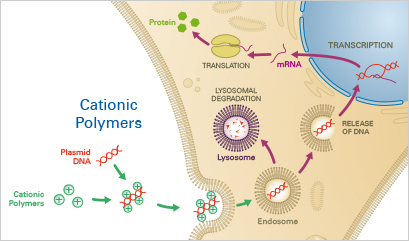 Read on and learn more about Viral Transduction or Physical Transfection.