After tracking, the paths of the cells can be visualized in trajectory plots that will already give information about the chemotactic effects. This is usually done using special software.

In a trajectory plot, all (x,y) coordinates of the cells' starting points are set to (0,0) using a coordinate transformation. With this setting, the general direction of cell migration is displayed and allows for first data interpretations. To finally confirm whether or not the observed cell migration is chemotactic or random, the data must be statistically analyzed. 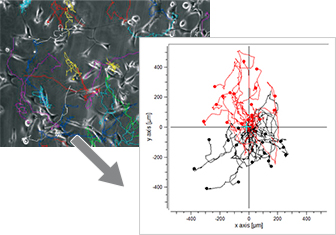 The Chemotaxis FastTrack AI Image Analysis  by MetaVi Labs is an AI-based automated image analysis solution for chemotaxis assays. The web-based software combines fast and powerful cell tracking with artificial intelligence (AI) for objective and reproducible analysis without labeling. Simply upload your data into your FastTrack AI account and start the analysis job. Within 1 to 2 hours, you will receive a detailed report for download and further evaluation.

The Chemotaxis and Migration Tool allows for the fast and easy creation of cell trajectory plots, as well as subsequent statistical analysis. For a better visualization of the chemotaxis effects, additional information can be displayed in the plots (e.g., color information of cells moving up/down, center of mass, and cell endpoints). All data can be exported for further analysis. The tool is freely available for download here.

In order to analyze and interpret chemotaxis assays correctly, it is necessary to know the meaning and calculation of the relevant chemotaxis parameters.

Further migration parameters are the Directness (D) and the cell speed/velocity, which, however, may not necessarily indicate a chemotaxis effect. All these relevant chemotaxis values can be automatically calculated by using the Chemotaxis and Migration Tool. 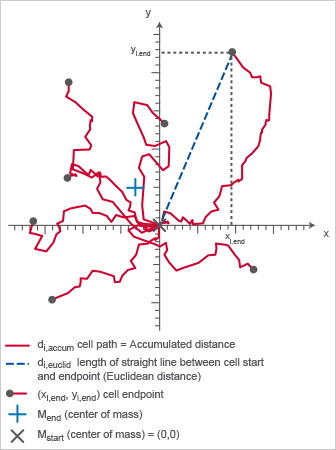 The Forward Migration Index (FMI) is an important measure for directed, chemotactic cell migration. It represents the efficiency of the forward migration of cells.

To determine if directed cell migration occurs in a chemotaxis assay, two FMI values have to be calculated:

The larger the FMI┴ or the FMI II, the stronger the chemotactic effect is on the x-axis or y-axis, respectively. 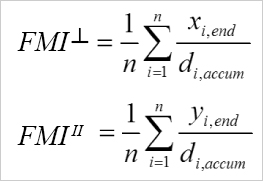 Calculation of the FMI┴ and the FMI II. i = index of single cells, n = number of cells, xi,end, yi,end = coordinates of the cells' endpoints, di,accum = accumulated distance of the cells' paths. 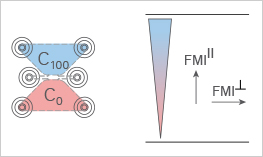 The Rayleigh test is a statistical test for the uniformity of a circular distribution of points (cell endpoints).

With p < 0.05, the null hypothesis (uniformity) is rejected, indicating a chemotaxis effect. Like all statistical tests, this one strongly depends on the number of analyzed cells. The Rayleigh test for vector data also includes the distance from the origin.

The center of mass represents the average of all single cell endpoints. Its x and y values indicate the direction, in which the group of cells primarily traveled.

Calculation of the center of mass (Mend). i = index of single cells, n = number of cells, xi,end, yi,end = coordinates of the respective cell endpoint. 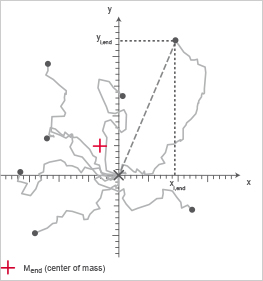 Chemotaxis plot; the Center of Mass is indicated in red.

The directness (sometimes also called directionality) is a measure of the straightness of the cell trajectories.

It is calculated by comparing the Euclidean distance (di,euclid) and the accumulated distance (di,accum) between the starting point and the endpoint of a migrating cell.

The directness values are always positive. A directness of D = 1 equals a straight-line migration from the start to the endpoint.

Calculation of the directness (D) of one single cell. i = index of the single cell, di,euclid = Euclidean distance, di,accum = accumulated distance.

Averaged directness of all cells in an experiment. 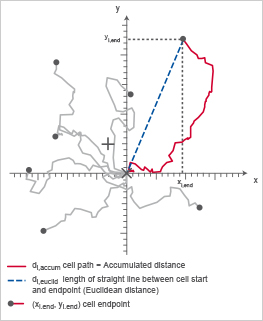 Chemotaxis plot indicating di,accum (red) and di,euclid (blue), which are important to calculate the directness (D).

The following criteria must be fulfilled to determine directed, chemotactic cell migration and to exclude biased migration by non-chemotactic environmental factors:

If these criteria are not fulfilled, the cell migration must be considered as random and non-directed.